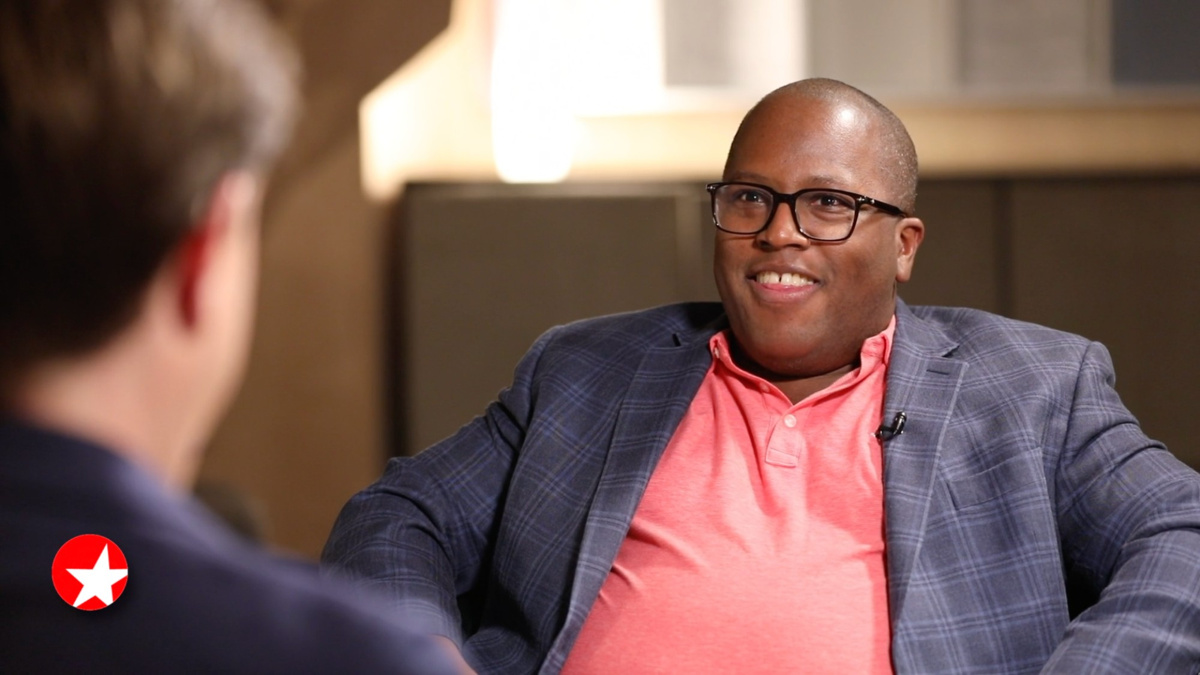 Tony Nominee Michael R. Jackson on How A Strange Loop Is ‘Emotionally Autobiographical’

Michael R. Jackson is already a Pulitzer Prize, Drama Desk, Outer Critics Circe Award winner, and now he’s nominated for a Tony Award for creating A Strange Loop, which is the most-nominated musical of the season. Featuring a book, music and lyrics by Jackson, A Strange Loop explores the thoughts of Usher, a Black, queer writer writing a musical about a Black, queer writer writing a musical. In celebration of the musical’s many honors, Jackson sat down with Broadway.com Editor-in-Chief Paul Wontorek at the Time Hotel to talk about the musical’s 20-year journey to Broadway and more.

Jackson first premiered pieces from A Strange Loop as a concert presentation, and it slowly made its way to having an off-Broadway bow at Playwright Horizons and then at run at Washington, D.C.’s Woolly Mammoth Theatre. Now, the musical is playing at Broadway’s Lyceum Theatre.

“The piece started off as a monologue that I wrote when I was like 22-23 years old. At that point, I certainly was not thinking it would be a Broadway musical,” Jackson said. “That wasn’t in my mindset at all. It was just a personal thing for me at the time. And then as I began to write music and put it in the monologue, it started to take shape. It was a story that I was chasing. I was trying to capture a certain experience in a jar. It wasn’t until after we got to Playwrights Horizons and the acclaim it got that it suddenly began to feel possible that something like Broadway could happen.”

Throughout the process of creating A Strange Loop, Jackson has given much of himself to the character of Usher. “The trick of A Strange Loop is that it’s an illusion, but an illusion doesn’t mean that it’s not real,” he said. “I did draw from personal experience to write the show. I felt everything that Usher has felt. I would call it emotionally autobiographical, but it’s not a one-to-one ratio of my life, in part because I wrote it over such a long period of time. Usher stays 25 going on 26. I’m 41 now. I have grown. I have changed. I’m an artist and I made an artistic expression of pain that somebody else can take and use that for whatever they need to use it for. That means a lot to me.”

Jackson won the Pulitzer Prize for Drama in 2020. The best thing about being Pulitzer winner is knowing that taking my time creating this piece is ultimately what earned its validation, he said. “That spending a lot of time on one piece of art is worth it.”

Watch the video below, and head here to check your local listings for The Broadway Show. Hosted by Emmy-winning anchor Tamsen Fadal, it is the only nationally syndicated weekly theater news program.